It’s confessions week this week, meant to obviously “bring the couples closer together” not set off the most drama possible in every relationship.

Yay, we start with Holly and the Texan. His dark secret is that apparently he’s slept with 350 partners, the result of some maths I don’t really understand. Holly says she’s “not here to judge him”… huh? After that mess at the wedding? Not sure who’s lying to themselves more out of these two. She makes it very clear her biological clock is tick tick ticking and wants him to impregnate her ASAP.

HER: I long for a baby and want my own family.
HIM: I banged 350 chicks over the past seven years.
EXPERTS: PERFECT MATCH#MAFSAU #MAFS pic.twitter.com/9w4EX2isrr

He responds in a way Holly says is comforting but obviously cos she’s ignoring every signal he gives her as usual. He starts avoiding her and then when she sits him down to talk about it, he says they’re on two separate pages and he can’t see himself changing nappies at 40. She ignores it yet again and tries to convince him (good idea!), which leads to a fight later on cos he “won’t let her finish her sentence”. To be fair we all got a taste of her “sentence” yesterday and who can be bothered? He storms out of the room and says he’s leaving to be with his daughter. We all know that’s not going to happen cos he wants attention wayy too much, so I guess we’ll see him tomorrow.

Just when I was wondering who the hell would be one of the 350 women who would want to sleep with him, they give us Sam and Al’s partner rankings (my favourite task!). Sam puts Texan first, and Al is just as incredulous as we are. It’s also a bit strange cos she says that Al is a 10/10 yet puts him behind Texan and Anthony, and I’m not sure how that maths works either. 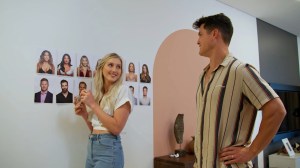 Brent and Tamara’s “honesty” tasks is watching their old audition videos back. Tamara’s is very similar to how she spoke on the wedding night, about how she wants someone with money and a nice car, and Brent is not too happy seeing it. He calls her pretentious and says that he’s not like that and doesn’t understand it. To her credit, she’s very embarrassed watching it back. There’s a bit of awkwardness until Brent says that he’s gotten to know her now and knows she’s not like that. I think Brent might actually be helping her become a better person!

im glad tamara is embarassed at watching herself back tbh#MAFSAU #MAFS pic.twitter.com/LVxM2saDCG

Jackson’s video talks about him protecting his mother and sisters against domestic abuse, something he hadn’t spoken to Olivia about yet. They also choose values (not rank people, damn it!) and pick the same ones. Hmm pretty sure these two crazy kids will make it.

#mafsau Jackson – you are one in a million. Hope you both find love and happiness. pic.twitter.com/8QcFg16RVS

I think most women in Australia would love to have this man by their side #MAFS #MAFSAU pic.twitter.com/VSaEffYYUx

Selin and Anthony do a letter writing task. Selin tells Anthony about her traumatic birth story, which many women can understand but still doesn’t excused her behaviour.