If you’re a girl – or a guy for that matter – you’ll probably be aware of guys’ (general) aversion to wearing condoms.

It’s strange isn’t it? When they’re made to be so thin these days, and they do SO much good in the protection stakes, but still – boys much prefer to go bare. 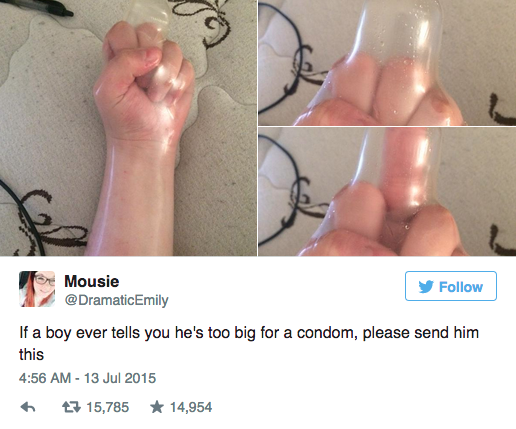 Well, one woman has decided to take on the claims that “condoms just don’t fit me” by taking one to her arm – blatantly showing guys that in fact, no batter how big your manhood, the common condom will fit to accomodate you, big boy.

If a man ever says he is ‘too big’ to wear a condom, show him this (from @DramaticEmily) http://t.co/E5KK4sXB2I pic.twitter.com/96PbyRwcy2

After a lot of flack from men saying “one size does not fit all” – 18-year-old Emily agreed but said, “level up then”, there are plenty of plus size options.

Girls – never be afraid to insist on asking your guy to wrap his tool again!