She’s a sweet, mum-of-two, who started her own enterprise, The Honest Company; an eco-friendly brand close to Alba’s heart.

Alba co-founded The Honest Company in 2012 with the intent to sell all-natural family friendly products. In 2015, the company was valued at $1 billion.

Now, the company is copping heat, pardon the pun, from angry consumers who claim the SPF 30+ Sunscreen, which is listed as sold out on Honest.com, but still available on Amazon, doesn’t work!

Don’t buy @Honest sunscreen unless u want to look like this. Second time I’ve tried this stuff and got fried pic.twitter.com/pEhO5GYIkQ

Consumers are claiming that the natural sunscreen is anything but effective, and have taken to social media to upload photos of their red, sunburned bodies. As of Monday, 60 per cent of the product’s reviews on Amazon were for one star.

My best friend used @jessicaalba #honest #sunscreen – after about 40 minutes in the sun she looks like this #SunBurn pic.twitter.com/Nwszxr9uRZ

Despite the product’s recent negative reviews, the company released a statement that it values customer feedback and stood by the product:

Our Sunscreen Lotion was tested, by an independent 3rd party, against the protocols prescribed by the U.S. Food & Drug Administration’s (FDA) monograph for over-the-counter sunscreen products. The results showed that our product is effective and safe for use as an 80 minute water-resistant (FDA’s highest rating), SPF 30 sunscreen lotion in accordance with FDA regulations when used as directed (Shake Well. Apply liberally and evenly 15 minutes before sun exposure. Reapply after 80 minutes of swimming or sweating, immediately after towel drying and at least every 2 hours). 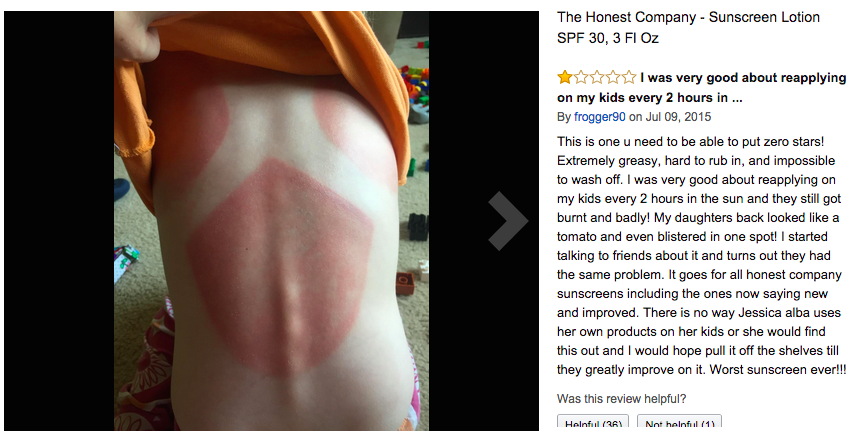 The Honest Company added that the negative product reviews “constitute less than one half of one percent of all units actually sold at Honest.com.”

Well, the images do speak for themselves, don’t they?