In some good news this morning, we have heard during a press conference with NSW Premier Gladys Berejiklian that there has been a decrease in daily coronavirus cases across the state.

127 additional positive tests have been reported over the past 24 hours… that’s compared to 174 yesterday and 212 on Saturday.

As shown in the graph below with data taken from NSW Health, you can see that the number of positive tests coming through each day has started to decrease. 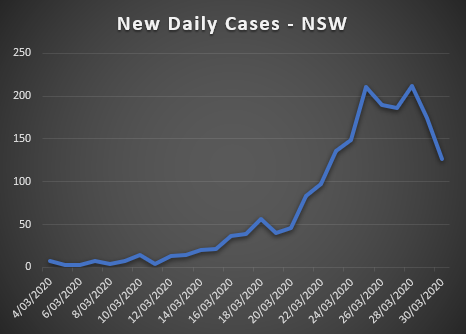 Despite this good news, NSW Chief Health Officer Dr Kerry Chant has said that we shouldn’t be celebrating just yet as case numbers can vary from day to day.

“Whilst it is pleasing we have seen a stabilisation in case numbers, it is important to know that they can vary and jump around day to day based on testing numbers,” she told reporters on Monday.

The total number of cases across the state now sits at 1918.There’s been 8 deaths since the outbreak began, while 26 people remain in intensive care units across NSW.

Gladys Berejiklian also addressed the new limits to gatherings during the press conference this morning, with just two people allowed for indoor and outdoor public gatherings unless you’re with immediate family.

Premier Gladys Berejiklian says she appreciates the measures are “frustrating” but people need to follow them for the good of the community.

“Gatherings outside or inside should not be more than two people unless it is your immediate family – that is something we will enforce,” she told reporters on Monday.

“We want everybody to practice that from today. Enforcement starts from midnight.”

Ms Berejiklian said people in their 20s and 30s were the “worst offenders” when it comes to flouting coronavirus rules.

“Also, the worst offenders in terms of not sticking to the rules are those people in those age groups. You can’t socialise as you used to.”

Uber Eats Has Pledged To Give Away 25,000 Meals Amid The Coronavirus Outbreak

3 Things We Can Practice To Protect Our Mental Health