Bad news for the likes of Paleo Pete if they decide to visit this Dublin café.

Because its owner has demanded gluten free diners bring a doctor’s note as proof of their dietary requirements.

In the Facebook post that has quickly gone viral, Paul Stenson, who owns The White Moose Café, shared an earlier run-in with a customer that led to the rant.

“This morning a girl asked us if we did gluten-free pancakes and when we asked her if she was a coeliac, she didn’t even know what the word meant and then proceeded to order regular, gluten-rich pancakes anyway,” he wrote.

“From now on, guests who demand gluten-free food are required to produce a doctor’s note which states that you suffer from coeliac disease.

“Guests following a gluten-free fad, who don’t even know what gluten is, can cop the f*** on and eat regular food like everybody else.”

Although not everyone necessarily agreed.

While some pointed out the difficulties for coeliacs, other’s reminded the café they had one job – to serve people the food they want.

In response to the others who questioned if the post was a joke, Stenson returned fire with a second post.

“Let me assure you that it was not a joke and I am deadly serious,” he started.

“Just as serious as I was when I said I’d charge a corkage fee for breastfeeding mothers, or when I threatened to give Valium to screaming babies, or even when I promised to shoot vegans dead at point blank range.

“In case you haven’t noticed, all posts on this page are deadly serious and it is imperative that you take them literally.”

He then followed that up with a picture of a first aid kit, telling fans “We are giving away free bandages for anyone whose feelings have been hurt over the past day or two.” 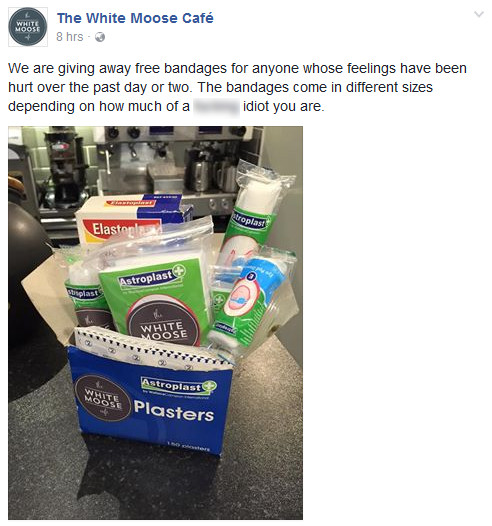 “The bandages come in different sizes depending on how much of a f****** idiot you are.”

Well that’s certainly one way to ramp up business.

TRENDING NOW: Is That Michael Jackson Hiding In The Back Of Daughter Paris’ Photo?

The Fastest Way To Lose Weight Means Giving Up One Thing

You’ve Been Doing Scones And Jam Wrong This Entire Time