Residents of a US housing commission have been outraged after their landlord gave them an “insulting” gesture during the festive season.

Found on a window of the Washington Square Apartments in Bellingham, Washington State, the note gave them an offering they weren’t expecting.

“The stress of COVID can be made worse by the holiday season,” the note reads.

“We hope this one-time offering of a postage-paid envelope to mail your rent check will relieve some of that stress for you.” 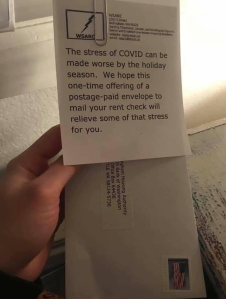 One of the residents, Paul Moore spoke of the disgust he and the other tenants felt after receiving the gesture.

“We were called ‘disgraceful and the world knows it’… ‘insulting,’ ‘tone-deaf’… those are the ones that you can use on the air,” Moore said.

“We were frustrated, to be honest with you.”

“What a slap to the face,” one wrote.

“This is just a way to say they went above and beyond to try to get your money on time,” another said.