Vegans across the country have called out Bunnings for using their famous sausage sizzle as a way to raise money for bushfire victims, claiming that farming meat contributes to global warming and therefore the risk of more fires.

“Why oh why are people selling sausages to raise money, when it’s known that meat is a contributing factor to climate change?!” a woman wrote in a post on the Facebook group ‘Vegan Gals Australia’.

“[It] is a contributing factor to these fires?! It honestly baffles my mind and makes me so sad,” she wrote before adding, “It’s a heartbreaking vicious cycle.” 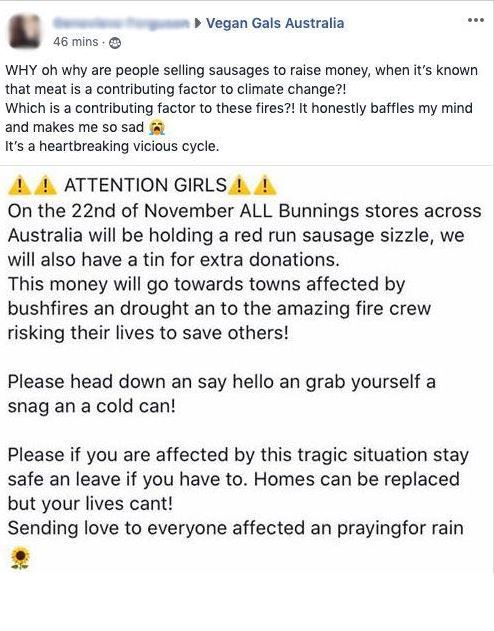 The comment came after the hardware giant announced that all proceeds from their sausage sizzle on November 22 between 9am and 4pm would go towards those affected by the fires and drought in New South Wales and Queensland.

The post, which garnered both negative and positive attention, was later taken down.

“Now is not the time to politicise the bushfire issue,” she said.

“If people want to be vegan then fine, good on them, but why should we be berating people who are wanting to raise money to help those who have lost everything in these bushfires.”

Bunnings has partnered with GIVIT, an organisation that ensures charitable donations are given to communities who need them most.