With the remaining contestants consisting of Sophie, Chad, Sarah, Kieran, Mat & Dan, it’s getting down to the nitty gritty.

So Sophie kicked Casey out of the ‘Alpha squad’ last week, and now is reigning queen with numbers on her side.

Dan and Mat have started to realise they’re not in the position they thought they would be and are scrambling by trying to get Kieran on their side, even though both of them have literally been straight up BULLYING him the entire season.

Hmmm, not sure how I feel about that …..

There was a mini “challenge” where the contestants stand in a box blindfolded and have to try catch pink pieces of paper for “advantages/treats” or blue pieces to inflict “disadvantages/punishments” on other players!

Looks like karma came to bite Kieran on his caboose, being an absolute slob the entire season, he was forced to wash everyone’s dishes for the rest of episode.

Chad won the elimination challenge after Dan got a little too cocky and with that sealed their fate.

Chat put Kieran and Mat up for elimination, hoping Mat would be safe and Kieran would be eliminated!

Both she and Sarah had a tactical conversation in the bathroom about whether they should take the opportunity to get rid of Mat while he’s vulnerable.

OBVIOUSLY Kieran got eliminated because no matter how much strategy the other contestants talk, at the end of the day they could.not.stand.him.

Big Brother loves Kieran more than any other of his children and saved him by poppin’ him in something called ‘The White Room’.

Let me re-iterate, Kieran has been up for elimination 7 times, finally got eliminated and Big Brother STILL saved him??

They don’t really go into it, but it looks like Kieran has to stay in that room and entertain himself and it’s going to drive him mental.

There’s two HUGE shiny red buttons that are itching to be pushed in the middle of the room.

What do they do? We have no idea but they sure are tempting. 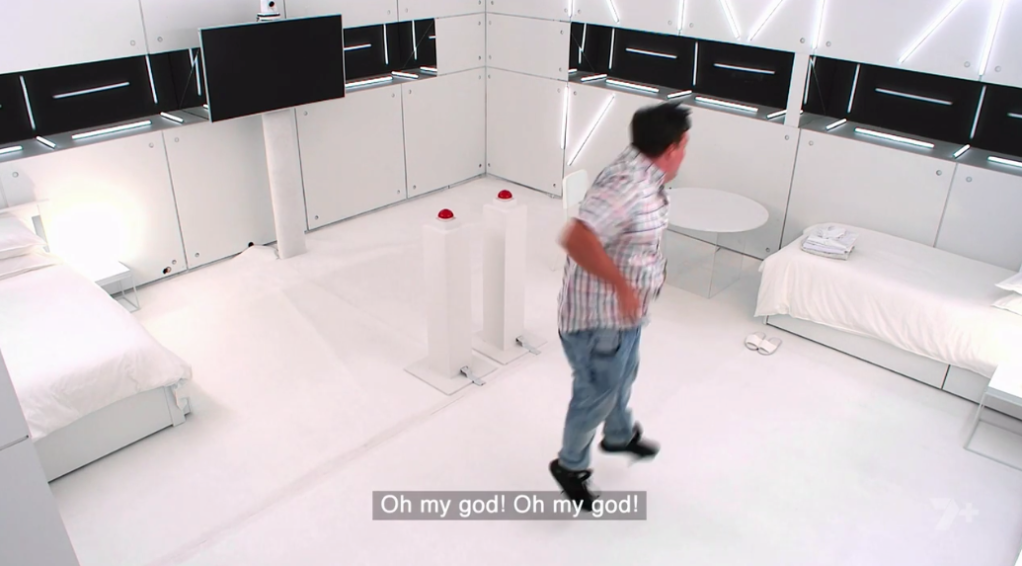 The Umbrella Academy Season 2 Trailer Has Dropped! Watch It Here!

Bachelorette’s Carlin Reveals Breakup With Angie Has ‘Taken A Toll’