While the Weeknd sings about the fact that he “Feels it coming”, we don’t think he predicted this near death experience!

The Grammy award winner was performing in Mexico City as part of his current tour when the shocking incident occurred.

The ‘Starboy’ singer was literally mid-song at the front of the stage when suddenly a piece of equipment came crashing down from the roof and smashed on the stage, narrowly missing him in the process.

At the time, it was unclear to the audience whether The Weeknd had even noticed the falling object as he barely flinched or missed a beat!

But it later became clear that he had and he’s clearly just a very committed performer as the singer later posted a clip of the incident to his Instagram story.

That’s right the whole thing was caught on camera and it’s actually TERRIFYING to watch!!

“Mexico forecast: Stormy with a chance of falling objects,” wrote The Weeknd in the caption, making light of the scary incident. 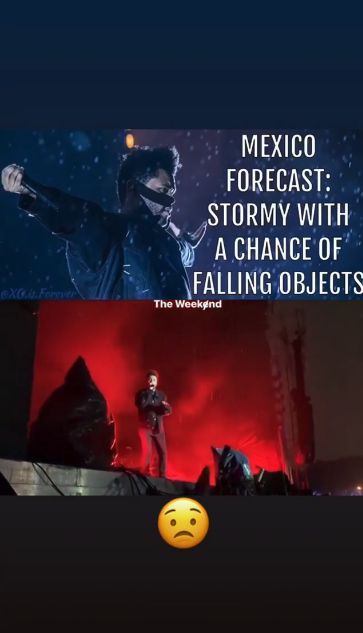 The concert in Mexico City was also interrupted by a mega storm, with rain pouring down on the audience as he performed. But while it dampened clothes, the rain didn’t appear to dampen anyone’s mood!

What a chaotic show! But when it comes to the Weeknd, the show must go on! He’s performing in Mexico City once again tonight. Let’s hope this one goes a bit more smoothly for him next time though!