There’s one thing you should know about The Veronica’s social media: they’re pretty kick-ass.

They’re not afraid to speak up and take on the trolls and they know how to keep things real.

Tell them they need to eat more? They’ll give you a shopping list of food they need.

This troll better follow through and buy me all my damn groceries! 💅🏼 I got food to make, don’t keep me waitin’ ☝🏻️ pic.twitter.com/X0l4yH0xQ1

Write an article that focuses on them performing braless? They’ll totally call you out on it.

That’s exactly what’s happened to The Daily Mail over the weekend when they published an article with the headline:

Feeling nippy? The Veronicas’ Jessica Origliasso goes BRALESS as the sultry pop twins take to the stage at the Northwest Festival 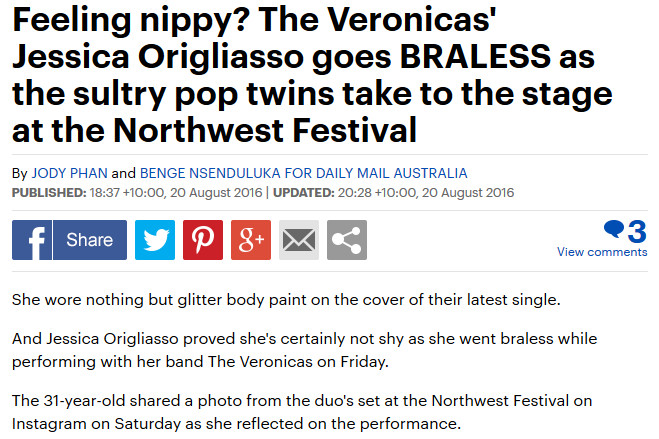 Featuring a photo from Jessica’s Instagram, the site went on to talk about the fact she’s not shy to go braless.

Well The Veronica’s weren’t about to take that sitting down.

Luckily this is 2016 and we have things like Twitter to tell the world exactly what we think – and that’s exactly what they did.

Lisa was the first to jump on with an “open letter” to the MailOnline calling the coverage “creepy and borderline sexual harassment”.

Open letter to @MailOnline please call our manager, your journalism is creepy and borderline sexual harassment. We’d love to have a chat.

Jessica was next, following it up by telling the journos “you are part of the on going problem of ‘normalising’ objectifying woman in our society”.

Jody Phan & @MailOnline you are part of the on going problem of ‘normalising’ objectifying woman in our society🖕🏼🖕🏼 pic.twitter.com/KNXiDgZE0O