In an exclusive interview with WHO, new mum Asher Keddie opens up about her first days with baby son Valentino. “I can’t believe how much I love him, it’s indescribable,” says the Gold Logie–nominated star of Offspring and Party Tricks.

“I’ll always remember that moment we met him to be one of pure joy,” she says. As was introducing Fantauzzo’s 5-year-old son Luca to his little brother: “He just melted,” says Keddie. 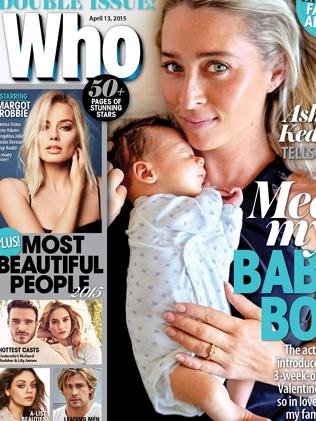 The couple who tied the knot in April 2014 in a secret barefoot ceremony in Fiji after first meeting two years earlier when Fantauzzo painted her for the Archibald Prize, share the intimate family portraits taken by Fantauzzo in the magazine and it’s obvious how much they are besotted with their dark-haired new addition.

News.com.au broke the news of the couple’s impending arrival after Keddie arrived at the GQ Men of Style Awards sporting a gorgeous baby bump.

“I’m not big on cravings but anything dairy for some reason. I want lots of cheese and lots of pistachios,” she told news.com.au of her pregnancy diet at the time.