IF YOU MISSED THE EPISODE TONIGHT OR YOU JUST WANT A BIT OF A LAUGH, WE’VE RECAPPED THE WHOLE THING FOR YOU IN 60 SECONDS…

Well it’s time for another juicy episode of The Bachelor and this week the competition has been turned on it’s head according to Osher.

Anyway, after a quick recap of last week we head straight to the Bachelor mansion where a date card awaits, except instead of following the usual pattern it’s for a group date rather than a single. The girls can’t deal with the disorder and the change.

But they manage to use their cunning detective skills to work out that the date must be for the girls who didn’t get to go camping last week. And they’re pretty much right except for one oversight.

Cass gets to go on the date which she’s super psyched about because she hasn’t smelt Honey Bachie in a couple of days and is starting to get withdrawals.

But this isn’t even the biggest surprise! The card also says that three additional ladies will join the date! Yep, INTRUDER ALERT, INTRUDER ALERT! And Cass literally goes from cloud nine to rock bottom quicker than you could say “stage-five clinger.”

But wait there’s more! The card also says that each intruder has something in common with Nick. Cue the girls freaking out even more! How dare they share similar interests to Honey Bachie.

Enough chit chat, it’s time for the date! *Grabs popcorn* We arrive in a garden where Honey Bachie has absolutely no idea that the intruders are about to arrive. Even better!

But when he finds out he gets an absolute throbby! Woohoo more girls to fawn over me! As for the other girls, there pretty much night one Vanessa Sunshine. Not thrilled.

Now let’s meet the lucky ladies that are about to enter the lions den shall we?

Introducing THE INTRUDERS! 😱 Brittney, Deanna and Jamie-Lee will send shocks through the mansion. Get the tea ready, #TheBachelorAU 7.30 Wednesday. pic.twitter.com/BCiw8PMVOM

Jaimie-Lee – who find out noting about other than the fact that she’s got a “banging” jumpsuit. Oh and Cat from Bali thinks her name is trash. But despite all of this she has some actual chem with Honey Bachie.

And finally, Brittany – who shall we say is a bit of a Nick Cummins fan girl! You can literally see Cass’ eyes turn to slits as she’s probably thinking “umm excuse me but the role of overly obsessed girlfriend is already taken!”

Now, what better way to welcome the new girls than with a harmless sports game. Well, at least we think it was supposed to be harmless.

Osher tells them they’ll be playing moon-hopper netball, because we can never play a normal sports game on The Bachelor, but it turns into a bit more of a wrestling match while Honey Bachie “umpires”/observes gobsmacked. Seriously where’s the jelly? 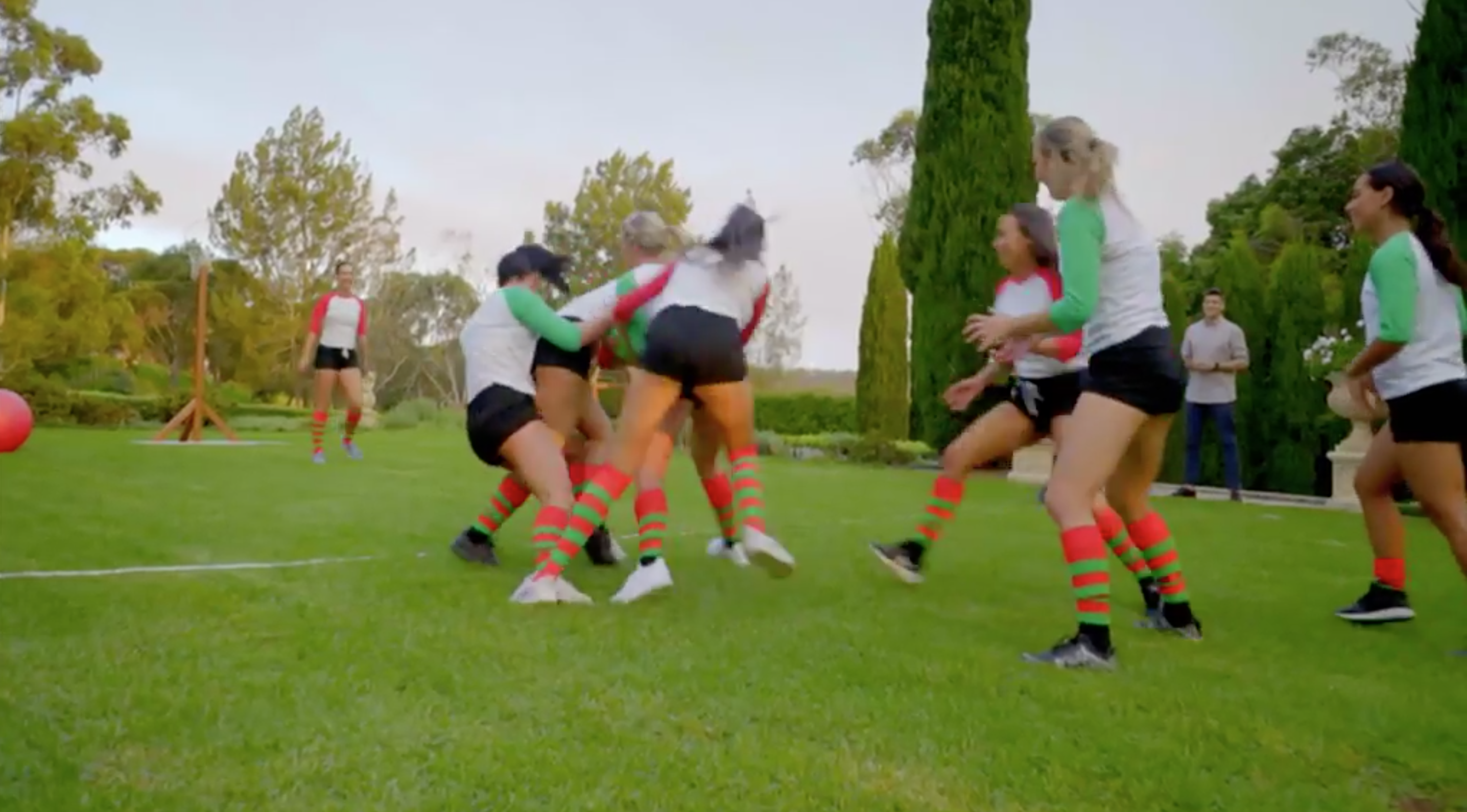 It’s all fun and games until Jaime-Lee rolls her ankle. All of the girls hate on her because she’s an intruder and she’s obvs faking it to get attention. But luckily she’s got her Nick in shining armour there to take care of her and he quickly whisks her away to a medic.

We retreat back to the mansion so the intruders can meet all the other originals. Cat from Bali and Romy spend the entire time bitching about them and talking about the fact that they are no competition for their amazing personalities.

Single date time, and it goes to Tenielle, who winds up being a bit of a dark horse! They ride around on a motorbike before Honey Bachie takes her to literally make honey.

They then go for some romantic time on the couch with a bit of wine where Tenielle gets a rose and even manages to score a smooch!

All is looking fine and dandy in Tenielle’s world right about now…that is until the cocktail party! You’d think the focus of the mean girls would be on the intruders but nup, Romy actually goes after Tenielle.

Romy doesn’t like the fact that Tenielle’s telling everyone she kissed Honey Bachie. She thinks it’s trashy…

Umm sorry sweetie have you already forgotten about your behaviour after your single? Or do we have to remind you of the fact that you told everyone you kissed Honey Bachie when you didn’t really and then you paraded your rose around down the front of your dress? Talk about classy huh?

Tenielle gets so fed up with Romy’s comments that she ends up running off set, sending the producers into an absolute frenzy. And TBH we don’t blame her. Romy is a master manipulator who knows exactly which buttons to push to get someone to snap.

But Tenielle eventually decides to come back just in time for the rose ceremony where 2 people go home. Sadly, Romy gets a rose and manages to stay another day and it’s bye bye to two originals, Rhiannon and Ashley.

Nick ‘The Honey Badger’ Quote Of The Day: “Jamie-Lee goes head over biscuit, rolls the ol’ getaway stick. There she is on the deck looking for a medic…”