Getting my kids to help out around the house is like pulling teeth from an angry, hungry, Great White shark. With one hand tied behind my back.

I know as a parent I should be enforcing this by now, especially considering my kids, at eight and six, are old enough to be doing some stuff to help out around the place. So far, the extent of their ‘helping’ is limited to packing up their toys (which only happens when I dig out a garbage bag and tell them I’m going to donate all their shit) and setting the table for dinner, which my eight-year-old has started to do quite happily.

But how much should we be expecting from our kids in the chore department? If this list, posted on the School Mum Facebook page, is anything to go by, then it’s a lot…. 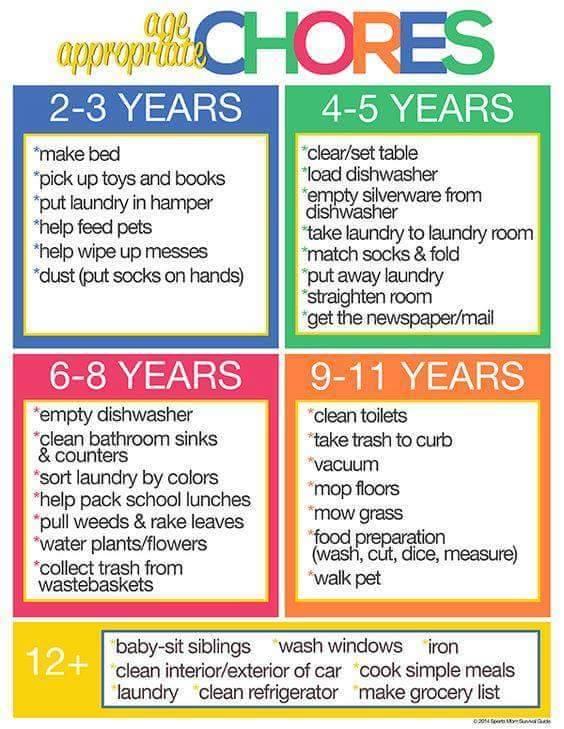 While I think it’s totally reasonable to teach your kids to pick up their books/pencils/toys from as young as possible, I don’t think I agree with assigning chores to a two or three-year-old

In my mind, the job of a toddler is to learn to use the toilet. To construct sentences. To learn their “please” and “thankyous.” That’s hard work for their little brains. Making beds and dusting? There’s plenty of time for that later; for now, let them focus on the hard work that comes with learning and growing.

On the whole, I think this list is a little full-on for young children – but it gives some good ideas for variations according to their level of ‘chore-ability’, which would be vastly different from child to child.

I wouldn’t expect my kids to do the washing, but I can put hampers in their rooms for them to throw their dirty clothes into. While I wouldn’t expect my nine-year-old to clean the toilet, I can expect at a minimum for them to replace the roll and throw the empty one out. Folding socks and undies is do-able, as is helping to clean the car or walking the pet as a family.

Of course, everyone’s opinion is going to differ here, but I think the idea behind giving kids chores is to give them not only a sense of responsibility, but an understanding that a home runs off some degree of team work.

Everyone’s got to pitch in, even in the smallest of ways, to lighten the load for the others.

This list has definitely given me a bit of food for thought when it comes to my own kids and the (very) little they are expected to do around the house. So tomorrow, there’s a new after-school game. It’s called, “who can find the most matching socks in one minute” and they’re gonna HATE LOVE it!

Tell us: What chores do your kids do around the house?

We Are Loving This Version Of Dolly Parton's Jolene!