Sydney-based art director Jarryd Zankovic, 28, has been labelled “Australia’s biggest wanker” on social media after appearing as a feature in a magazine.

He discusses his personal style in the interview, which was conducted by B&T Magazine, complete with a photoshoot profiling the most stylish people in advertising.

In the article, titled “Industry Fashionista”, Zankovic calls himself a “hybrid between beauty therapist and tradie” and mentions that he is of the “Surry Hills mould”. 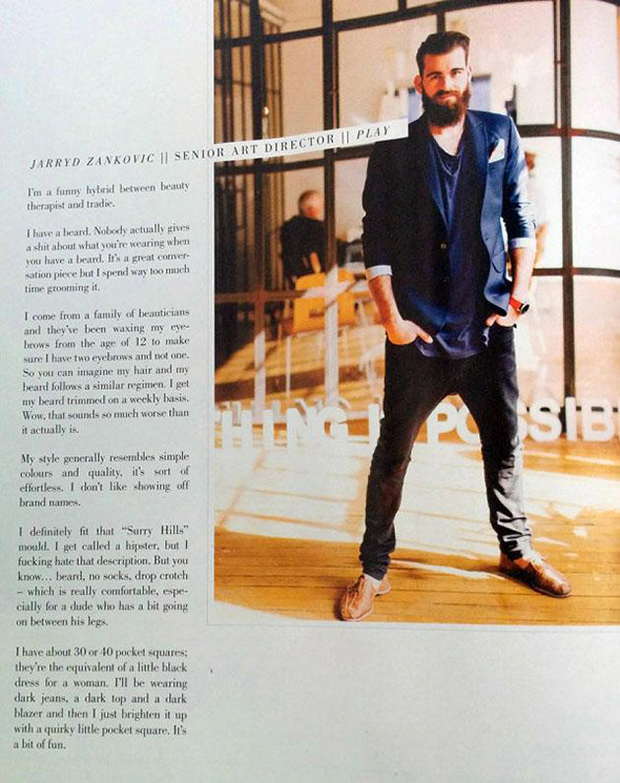 The 28-year-old, from Wollongong originally, now lives in Surry Hills, and describes his extensive haircare regime in the interview.

He apparently comes from a family of beauticians who have been waxing his eyebrows since he was prepubescent… He gets his beard trimmed once a week… And apparently, “that sounds so much worse than it actually is.”

Zankovic has been mocked mercilelessly for his comments on social media – with a post on Reddit with the title, “is this Australia’s biggest wanker?”

Since the article went viral, Jarryd’s workplace has hit back –

“We were surprised by the tone of the article – it certainly doesn’t reflect Jarryd’s nature at all – he’s a great guy who’s both talented and grounded,” they said. “Although he’s always well-groomed, more than anything he was having a laugh at himself and general stereotypes – some things have been taken out of context.”