After denying him celebrity status for a LONG time, Instagram has finally agreed to give Married At First Sight’s Nasser Sultan a ‘Blue Tick’.

The Insta feature signifies that an account has been verified by the platform as a public figure, celebrity or global brand and Nasser has been on quite the quest to get one for himself.

Following his stint of season five of MAFS, Nasser was adamant that he deserved the blue symbol on his account.

To simplify the story, he basically wouldn’t shut up about it. He posted videos of himself going to Instagram HQ to personally request the tick and even released his own rap song about his quest for recognition as a celebrity.

But despite all of that, he couldn’t seem to break them down. That is, until now.

Nasser sent a text message to one of the Kyle and Jackie O producers this morning telling us that he had finally received his blue tick.

“Got the blue tick finally,” he wrote.

He also announced the news on his Instagram story, telling everyone it had been a long 2-years of trying that finally got him here.

“After 14 knock backs and 2yrs of trying finally I am a fully recognised celebrity!!” he wrote.

Yep you certainly can’t say that he isn’t persistent… No word on what finally convinced Insta to give up the tick, but after 14 attempts you’d assume they may have just caved in. 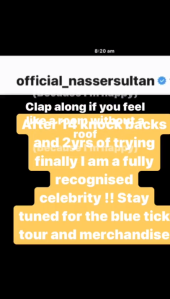 Now that the tick is in his possession, we’re hoping that he’ll stop talking about the subject now… But something tells us our wish will not be granted.

“Stay tuned for the blue tick tour and merchandise,” Nasser continued in his post.

Great. Looks like we’ll never be hearing the end of this one.