Comedian Harry Shearer is officially returning to cartoon series The Simpsons almost two months after falling out with show bosses over his contract.

The 71-year-old actor took to Twitter in May to tell fans his decision “wasn’t about money”, claiming he needed more freedom to take on other projects. 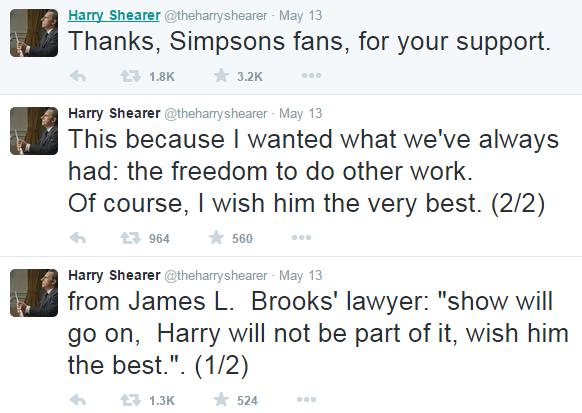 However, producers Al Jean and James L Brooks refused to let Shearer go so easily and it has since been revealed the two parties have reached a deal which will bring the actor, who voices characters such as Mr Burns, Ned Flanders and Principal Skinner, back to the show, according to Variety.com.

The Spinal Tap star has been voicing the popular figures since 1989 and his return means all the original actors, including Dan Castellaneta, Julie Kavner, Nancy Cartwright, Yeardley Smith and Hank Azaria, will be back for seasons 27 and 28.

According to HollywoodLife, Shearer will receive upwards of $300,000 per episode.