In a Q&A he held on Facebook on Tuesday, the 31-year-old fielded questions from physicist Stephen Hawking and Terminator star, Arnold Schwazenegger.

But the most important revelation of the Q&A was on the future of Facebook, Zuckerberg said immersive experiences such as virtual reality will become mainstream and that people will eventually be able to share what they are sensing or feeling.

“One day, I believe we’ll be able to send full rich thoughts to each other directly using technology,” Zuckerberg said.

“You’ll just be able to think of something and your friends will immediately be able to experience it too if you’d like.”

Hawking asked what big questions in science he would like to know the answers to. 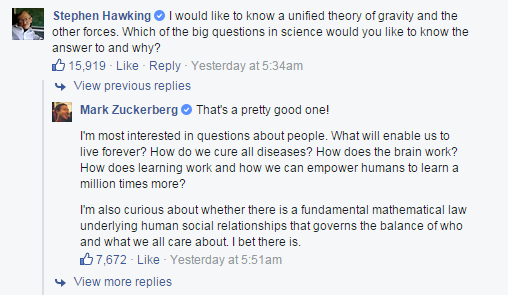 “I’m most interested in questions about people,” Zuckerberg said.

“I’m also curious about whether there is a fundamental mathematical law underlying human social relationships that governs the balance of who and what we all care about. I bet there is.”

And Arnie asked about his fitness regime, and to be honest, we expect nothing less from the former fitness champion. 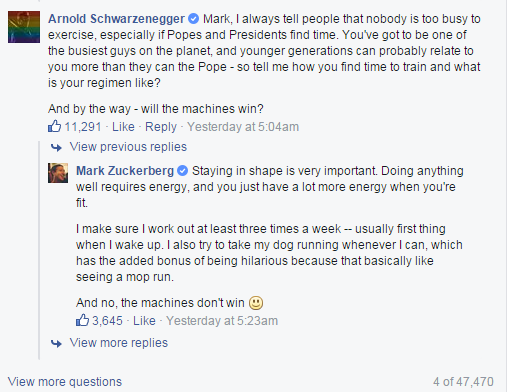 Arnie asked: “You’ve got to be one of the busiest guys on the planet, and younger generations can probably relate to you more than they can the Pope — so tell me how you find time to train and what is your regimen like?”

Zuckerberg said he works out three times a week and tries to run with his dog, “which has the added bonus of being hilarious because that is basically like seeing a mop run”.