She’s obviously smart, she’s gotten herself through law school but doesn’t seem to be pursuing a career in law…

She actually came out this week and said she’s ACTIVELY not pursuing law and it’s not a lack of offers.

On an insta-live Q&A, a fan asked her “why didn’t you pursue a career in law?”.

Stacey replied to this with “It’s just a personal choice. I got offered a position today by a friend, like a lawyer – a senior lawyer – that deals with defamation and stuff”…. uhh why do I secretly want to call BS! 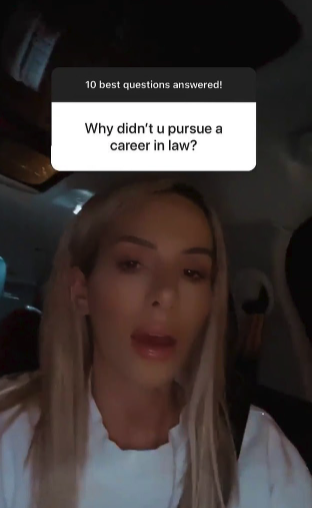 She continued on to say she has a lot going on and that the post-natal depression charity she’s establishing takes up most of her time, which is a great cause- good for her!

“And then my active line, coming out. It’s crazy!” she went on to say, which is true, she got a pretty cool looking exercise clothing range coming out!

If you follow Stacey you know she likes EXPENSIVE stuff, she loves a good brand, so fans have questioned how exactly she’s affording all these things if she’s not actively working.

“I make money from social media, and my collaborations” she said and went on to say she’s got some investments here and there and I’m DYING to know how much a post on her socials would cost a brand!

If it’s paying for Louis Vutton? Damn… get that coin girl.

Love this? You’ll love this bit from Will & Woody – catch the boys weekdays from 4PM on KIIS 1065
MAFS mafs2020 married at first sight Stacey Hampton