They might have looked to have been completely in love when they took out the title of Love Island Australia but today it has been announced that the loved up pair, well, aren’t so loved up.


This news comes after Grant and Tayla appeared on the Kyle and Jackie O show and revealed that the rumours of Grant being in a relationship with another woman when he entered the Villa were true.

Tayla told us that she was completely shocked when she found out about the secret girlfriend and thought about breaking up with Grant then and there. She told us thought that they were attempting to work on their relationship and move forward but it looks like that is no longer the case.

Tayla has taken to her Instagram page to thank everyone for their support during the journey. She confirmed that her and Grant have both decided to split but will remain friends.

In an interview with The Fix Tayla said that she felt that Grant was just “too young” for her and this fact ultimately caused her to break things off with him on Wednesday evening.

“Obviously I’m heartbroken, it was a big shock to the system,” the 21-year-old explained. “I still respect him as a person and I just think he’s young and he’s made a massively bad decision, and didn’t really think of the consequences that maybe a girl would have fallen in love with him, which just happened to be me,” she said.

“Hopefully that’s something he learned through this experience and he learns how to play with people’s emotions.”

Grant has not yet made a statement about the break-up, but it seems that this could be because he had no idea that they had split!! Grant posted a comment to Love Island Australia’s Instagram post saying, “This is news to me??” with a shocked emoji. 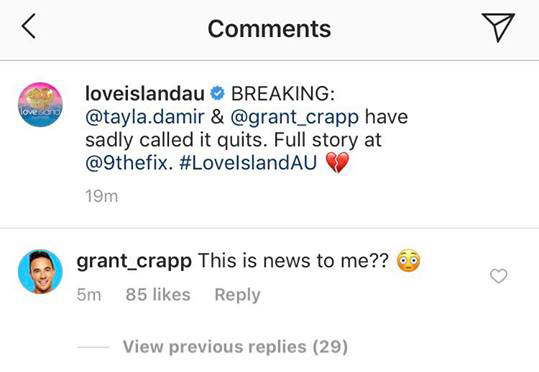 Is this just Grant being, well Grant and just being a bit behind on things? Or did he seriously have no idea? We’re sure that there’s going to be more to this story…Stay tuned!