Aside from the Perry-Gigi-Zayn ~drama~ of the last few weeks – and the news that Jesy had split from fiancé Jake Roche – Little Mix haven’t exactly been behaving themselves during their latest promotional tour.

The girl group’s appearance on UK breakfast show Sunday Brunch last week sparked a furore after Jesy and Jade admitted that they hadn’t gotten home until four o’clock that morning, with many accusing them of still being drunk.

And now Jade’s at it again with some straight-up bizarre behaviour on French TV.

She kicks off with some sly, cheeky glances to camera before twisting her head from side-to-side, Exorcist-style and then sniffing. Loudly.

Jade herself posted the clip to Instagram, captioning it “when the jet lag gets to you”, but a LOT of people have been calling out the 23-year-old for taking drugs.

There’s also the standard Illuminati accusation because – and this one is so obvious is MUST be true – the girls are going on tour with Ariana Grande and Ariana Grande is a member of the Illuminati and all of her songs backwards are asking for help. 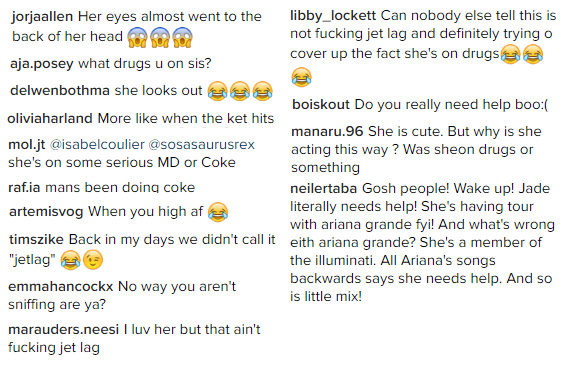 Jet lag can do strange things to a person, so we’re going to choose to believe young Jade this time but, girl, maybe next time check the camera’s not on you?

WATCH: The First Trailer For Beauty And The Beast Is Here!