We’ve heard the rumours before, but each time fans seem to come up with a new reason as to why they think Kylie Jenner is pregnant with her second bub.

And the latest theory is such a wild stretch we don’t actually think we should get our hopes up too much.

Kylie’s currently stuck in the middle of the Khloe/Tristan/Jordyn cheating scandal as well as a rumour that her beau Travis Scott has been messing around behind her back too.

But despite all of drama, fans seem to think that she’s also pregnant with baby number 2!

Here’s why: (And just a forewarning, we think it’s pretty ridic)

According to some mega Kar-Jenner fans , a few recent posts on Kylie’s Instagram account seem to suggest that she’s got a bun in her oven.

The first post is a video of Kylie’s first daughter Stormi clinging to Kylie. In the video, the mum-of-one can be heard saying, “Girl! You’ve gotta do things without me!”

The second post being used in this theory is one of Kylie cuddling Stormi to her belly while lying on a jumping castle. The caption reads, “My baby is stuck to me like glue lately.”

So why do people think that these posts mean that Kylie’s pregnant again? Apparently it has everything to do with the way Stormi is clinging to her mumma.

Apparently because babies have some sort of sixth sense when it comes to pregnancies and feeling their siblings coming along. 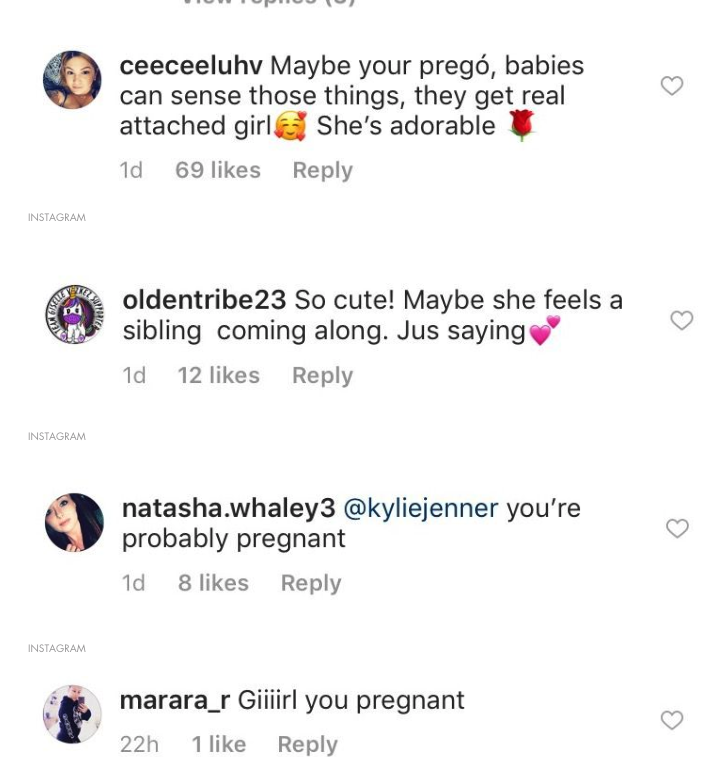 Yeah…We told you it was a pretty loose theory.

But we don’t blame people for being suspicious! This isn’t the first time that fans have suspected a second baby from the beauty mogul!

Fans went nuts when Kylie posted a pic with her baby daddy Travis Scott with the caption ‘Baby #2?’. She later clarified that she was only teasing and wasn’t actually pregnant.

And given that Kylie kept her first pregnancy with baby Stormi a secret until she was actually born gives a lot of people trust issues. So we reckon these theories are going to keep on coming until the day that they’re actually true.