We were over the moon when we saw things finally go right on a reality dating show for The Bachelorette Ali Oetjen last night, as her and Taite Radley confessed their love for each other.

But of course, we were sort of expecting this Bachelorette finale to go in a completely different direction after multiple rumours pointed to the fact that Ali might have had her heart broken and was still single.

One of these rumours was based on the fact that the final two guys in the running, Taite Radley and Todd King, had been pictured over in Fiji where spin off show Bachelor In Paradise is currently being filmed.

Of course everyone immediately thought that this meant that the pair were both taking part in the reality show, meaning that neither of them ended up with Ali.

Now that we know that this isn’t the case and Ali and Taite have finally been able to go public with their loved up relationship, we needed to get to the bottom of what was really going on in that photo. 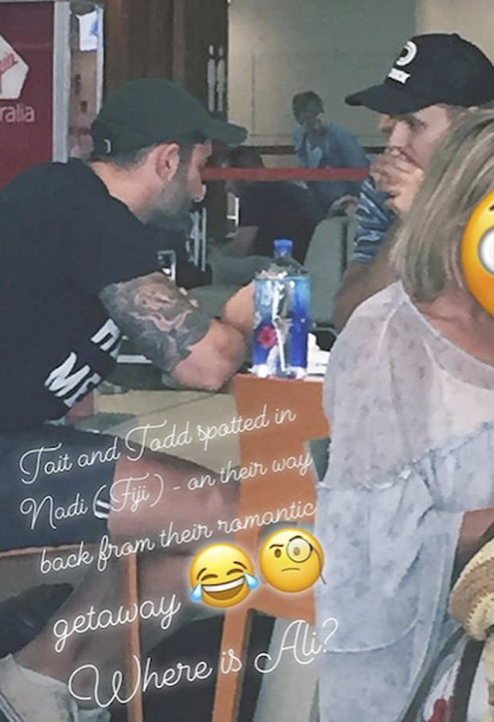 And so when Ali and Taite both came into the studio to chat with Kyle and Jackie O this morning about the season, they decided to ask him about it.

“Can I ask thought Taite, what were you doing in Fiji? That was like a day before the finale, you guys were photographed at the airport together,” said Jackie.

Taite didn’t deny that he had been out of the country and yes he had been with Todd, but he said that it had nothing to do with Bachelor In Paradise.

In fact, he said that it was just a little holiday that Channel 10 had organised for him so that he could have a break from the media attention. Most likely to put us all off the scent of who wins if you ask us.

“Yeah so Channel 10 gave us a bit of time off and offered us a free holiday and yeah we took it up,” Taite explained. “It was a few days ago.”

He continued to explain that he and Todd hadn’t actually gone on the holiday together but they had met up while they were both over there.

“Todd was over there and we caught up and yeah,” he continued.

Now of course we know after that heartbreaking break-up last night that Todd is most likely single at the moment. So is it possible that he was there for Bachelor In Paradise?

Taite didn’t really have an answer for this one.

Either way, people are definitely keen for Todd to appear on reality TV once more! Since last night, a campaign has pretty much been launched on Twitter for sweet Todd to become the next Bachelor.

Todd for the next Bachelor PLEASE 💔 #BacheloretteAU

Todd for bachelor. Todd for king of the universe. Todd for everything. #BacheloretteAU

If Todd is the next Bachelor… sign me up ! 🙋🏼‍♀️ As single as a Pringle 🌹 #BacheloretteAU

And we have to say, if this doesn’t happen, we will riot… You’ve been warned Channel 10. Make it happen!

WATCH THE FULL INTERVIEW BELOW:

Newsreader Brooklyn Ross Might Be About To Become A Dad

Intern Pete Gets Stitched Up In Savage Only Lying

Kylie Minogue Reveals She Was Once On The Dole