Not all heroes wear capes but this one dad certainly deserves one after his incredibly heroic act saved his son’s life.

A lot of parent’s will do absolutely anything and go above and beyond when it comes to their children, and hero dad Brad Lewis proved this tenfold by making the split second decision to risk his own life to save his son after a day of fun went terribly wrong.

Brad and his family had been visiting some friends at an apartment in North Sydney when he and his eight-year-old son Oscar decided to play harmlessly with some toy nerf guns.

It wasn’t until one of the little foam bullets went over the edge of the balcony that things went terribly wrong. When the family visited Kyle and Jackie O this morning they explained just what happened at this point to make Brad a hero dad.

“This is how I think it went down and this is why you’re a hero dad and a lot of people would’ve heard about this story,” said Jackie. “Oscar leant over to check where the bullet had landed and sort of lost his balance and started tumbling over the railing and was falling off.”

But a split second decision from Brad stopped this scenario from going from bad to simply horrific. He quickly jumped over the balcony after Oscar, grabbed him and pulled him close to his chest cradling him and breaking his fall.

The pair fell about five metres down onto a concrete path. Oscar was concussed after the impact and suffered a few minor injuries, but it was Brad who took the brunt of the fall and was left with major head and neck injuries.

Brad’s wife Suz saw the whole thing happen as she was walking down the driveway and she told us that straight away she knew that Brad’s injuries were serious.

“I stopped at paused and thought, ‘Do I need to call 000?’, and then I looked at Brad’s head and went, ‘Yeah I do’,” explained Suz. “The friend’s house we were at, her husband came running down and he just grabbed Brad’s head and held it together. It was like an orange and just held it back together.”

The doctors were shocked that Brad managed to survive the fall and they said that if he hadn’t cradled his son, Oscar certainly wouldn’t be here right now.

When Kyle and Jackie O heard about this story their minds were blown. The were moved by fact that a parent’s love for their child could be so incredibly powerful.

They thought that he deserved to be father of the year, but seeing as we can’t make that call we decided to at least make him feel like it instead with a Kyle and Jackie O Giveback.

Our surprise for the Lewis family had three parts. Firstly we crossed to our KIIS Thunderbirds who we had positioned at the Lewis family home. We knew that their two young son’s are obsessed with skateboarding and that Brad loves taking them to the skatepark, and so we had the guys over at Skateology build a special skate ramp for them in their own backyard! 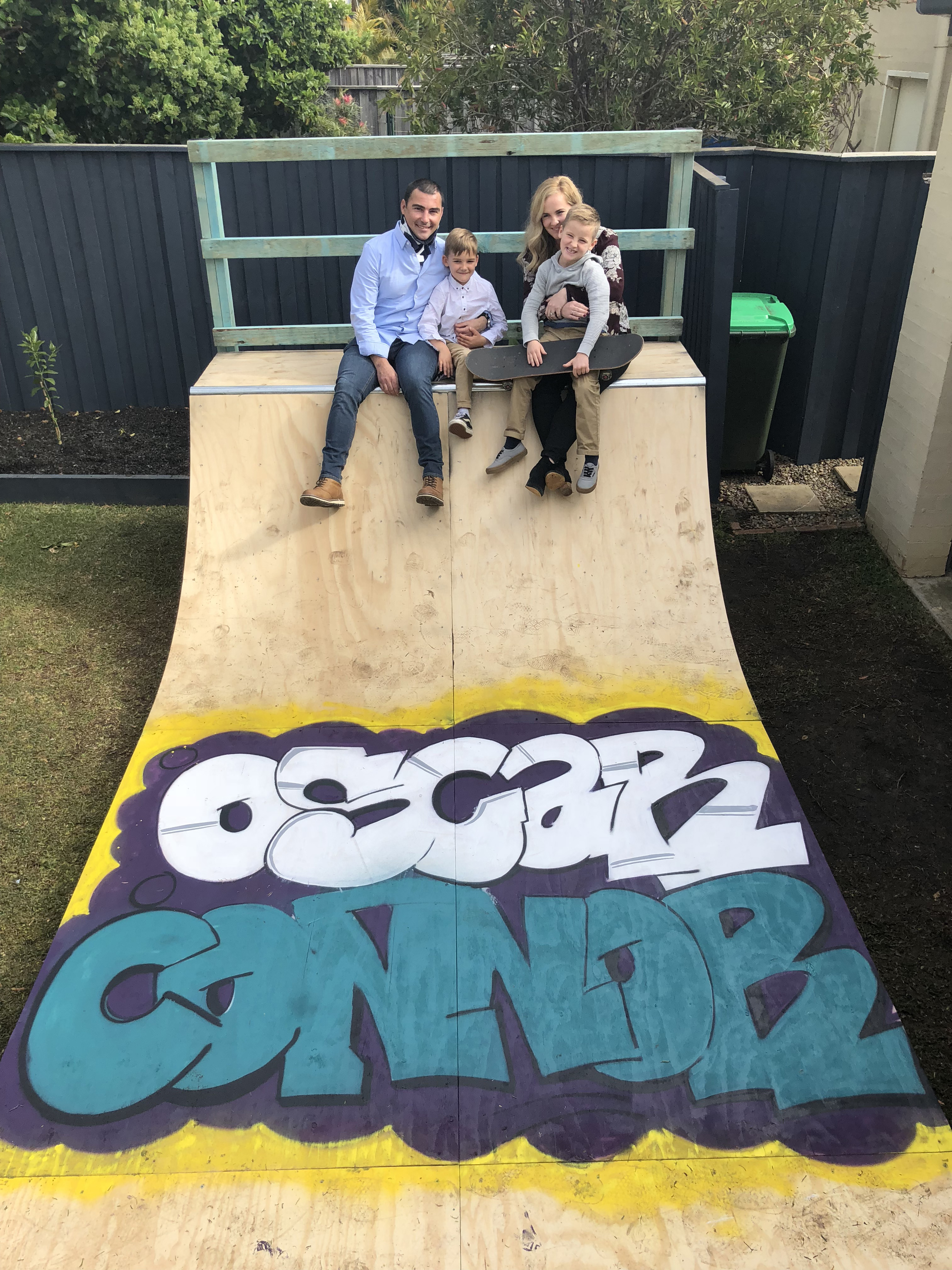 Secondly, we also know that Brad and the boys are big fans of motorbike racing, and so our friends at the Australian Grand Prix helped us organise a trip for the whole family to Phillip Island next October, when Brad has hopefully fully recovered from his injuries, to the Motorcycle Grand Prix.

The family will get a 3 day pass to the event as well as a meet and greet with one of the riders and all flights and accommodation has been organised thanks to Destination Phillip Island and Amaroo Park.

Last but definitely not least we had a surprise caller phone up at the end offering up their help to the Lewis family as well It was our good friends at Clarendon Homes who had heard the Lewis family’s story and wanted to help out.

Clarendon Homes offered up $10,000 to help the family, who has no doubt been doing it tough in recent times and are in need of a bit of financial support. And to be honest, little Oscar couldn’t have been more excited by the cash!

“I would rather just have that and spend it all on lego!,” he said with the biggest smile on his face.

If you wish to help out the Lewis family in any way you can visit their GoFundMe page here.

Shannon Noll Dropped A Song To Raise Money For Our Farmers

Lift Hacks That You Won’t Believe Are Possible

Come Work With Us!