For a lot of people, their morning routine starts off with a cup of coffee and a newspaper to catch up on the important news happening around the world.

However this morning, a lot of people will be surprised when they wake up to find our very own Jackie O splashed on the front cover of The Daily Telegraph, and she’s got a lot to say about it.

“Are you aware that you’re in the newspaper today?” asked Kyle during the show opener on Tuesday.

“I did not realise I was on the front page of the paper,” replied Jackie. “Not a great article by the looks of it though.”

While the picture used of Jackie on the cover is incredibly flattering, featuring one of her many shots from her recent trip to Fiji, the headline was not so nice.

“Weigh Off The Mark – Experts Slam Star’s ‘Starvation Diet’” reads the headline with a push to read more on page three. The story then dives into an analysis of Jackie’s alleged 10kg weight loss diet and a conversation with nutritionists who slammed what they called her “dangerous plan”. 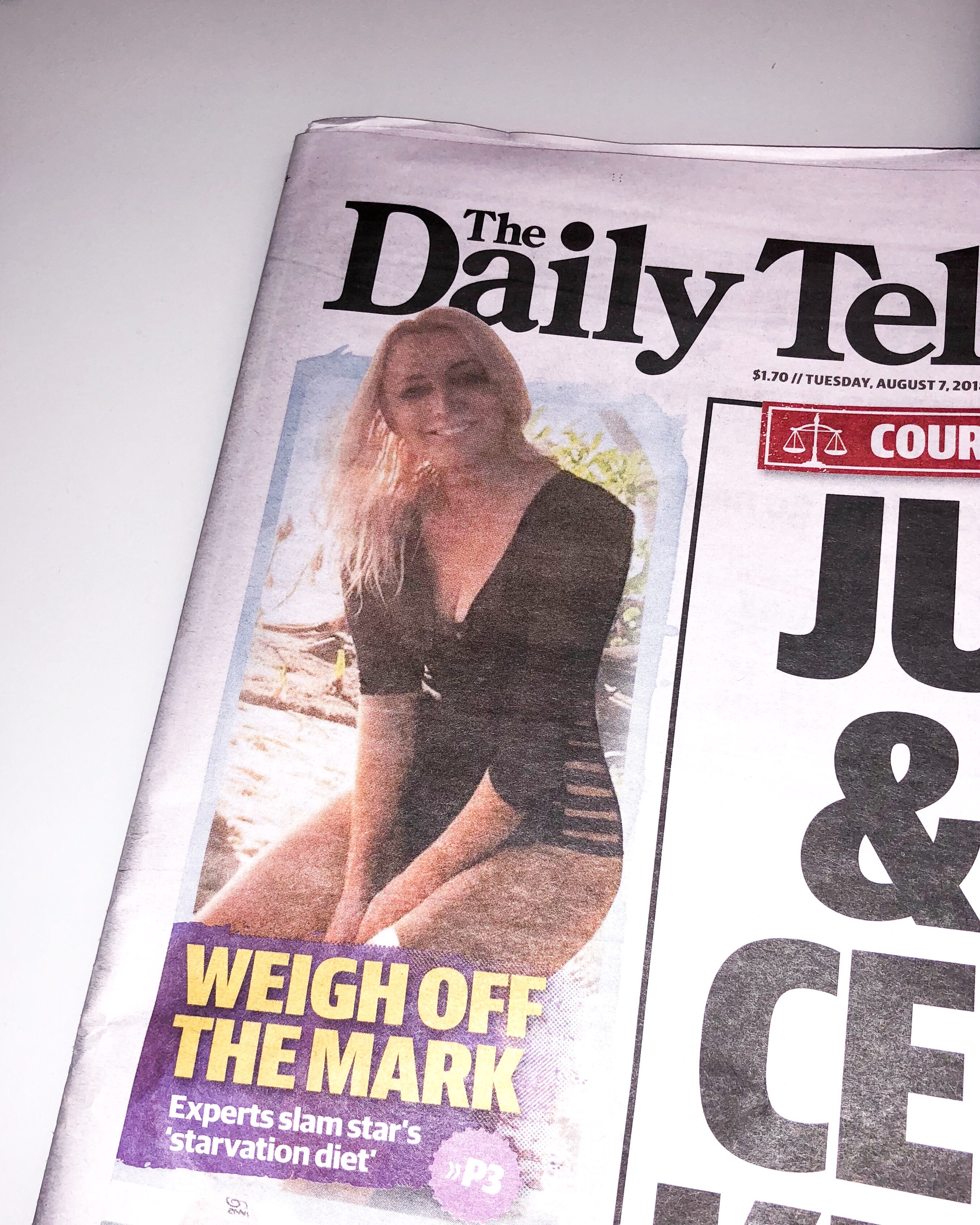 This story comes after an off the cuff conversation that Jackie had with Kyle on the show yesterday where she said that she doesn’t eat breakfast and will only eat an avocado for lunch when she goes home and some chicken for dinner.

“Look yesterday you, off the cuff, it was a very casual conversation about ‘what do I have for lunch and do I have breakfast’,” started Jackie. “No I don’t have breakfast. And then I said I have an avocado for lunch.”

After these comments, the article claimed that this “low-calorie daily intake” was how Jackie managed to lose weight and that by boasting about it during her show she was encouraging “eating disorders” and reinforcing “bad eating habits”.

Today, Jackie took the opportunity to clarify her comments about her eating habits and clear up any confusion that may have come from them after this story was blown completely out of proportion.

“Well maybe what I should have clarified is that whilst I’m doing that on some days…I don’t eat that every single day,” she continued. “If we want pizza, I’ll have pizza. If we want to go out for a pho I’ll eat that…If I wake up and I’m hungry I’ll have toast. I don’t stick to that religiously.”

It’s no secret that Jackie has been working hard to lose weight, and in the time of a about a year she has managed to wipe off about 10kg. However, she reassured her listeners this morning that she by no means is doing this by starving herself nor is she encouraging others to do this.

“Do you know what, when I do eat an avocado I feel good. It makes me feel good. I’m not starving myself by any means. And I would never ever endorse that,” continued Jackie. “I don’t want anyone out there starving themselves to lose weight.”

“I still allow myself all the things I want, but there are days during the week where I eat less and I guess that’s being taken out of context…Saying I’m starving myself is so incorrect and so not the message I want to be sending out there,” she concluded.

You'll Die Of Laughter When You Hear Kyle's Funeral Fiasco