Just months after Liam Payne and Cheryl got together, rumours circulated that the loved-up pair were already trying for a baby together.

Now, 23-year-old Payne has changed his Twitter bio to say he is ‘the happiest man in the world’, and fans are going NUTS, speculating that the pair may be expecting.

Fans were pleased to see Cheryl in a L’Oreal ad looking healthy and glowing, instead of painfully thin. 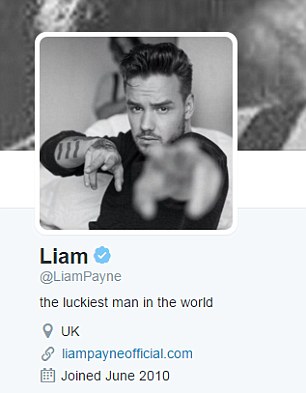 Emotions were running high, as an overzealous Liam fan posted: ‘I swear if Liam got Cheryl pregnant, I’m gonna fight someone,’ whilst one wrote: ‘Rumors going around that Cheryl is pregnant w/ Liam’s baby. I can’t picture my baby having a baby right now, but imagine how cute he’ll be.’

Rumours began to circulate about the couple after a source told Now magazine: ‘Cheryl’s never been more determined to have a baby.

‘It’s like it’s the only thing in the world that matters to her.

‘She’s never been so focused on something. Cheryl has a stash of pregnancy and motherhood books she’s always reading.’