Hayden and Sara have no doubt made some outrageous claims during their time on this season of The Block, most recently being that the threat of divorce after a recent argument on the show, but the latest one takes the cake.

Hayden Vale jokingly claimed on Instagram that our very own shock-jock Kyle Sandilands had purchased the apartment he and wife Sara are currently renovating on the reality show for a whopping $3 million.

After reading the headline in the news this morning that Kyle had apparently purchased a slice of The Gatwick Hotel down in Melbourne, Jackie decided to bring up the gossip with Kyle on air during her O News segment to see if there was actually any truth to it.

“There’s a story involving you Kyle doing the rounds, this is quite interesting,” began Jackie before explaining the rumour.

“So on The Block, obviously you have Hayden and Sara, anyway there was an online exchange going on where Nasser from Married At First Sight sort of said he’s set to make a celebrity cameo on The Block.”

Okay let us just stop right there for a second. Anything involving the explosive Nasser and the words “online exchange” can’t be good…And yep as you guessed it, Nasser ended up in a bit of a tiff with the equally explosive Hayden and Sara.

In his post, Nasser put up a picture of himself wearing a fluro vest and hard hat that said ’The Block’ with the caption, “Nasser is heading to The Gatwick for an extra special cameo! See you soon.” He then tagged Sara and The Block in the post. 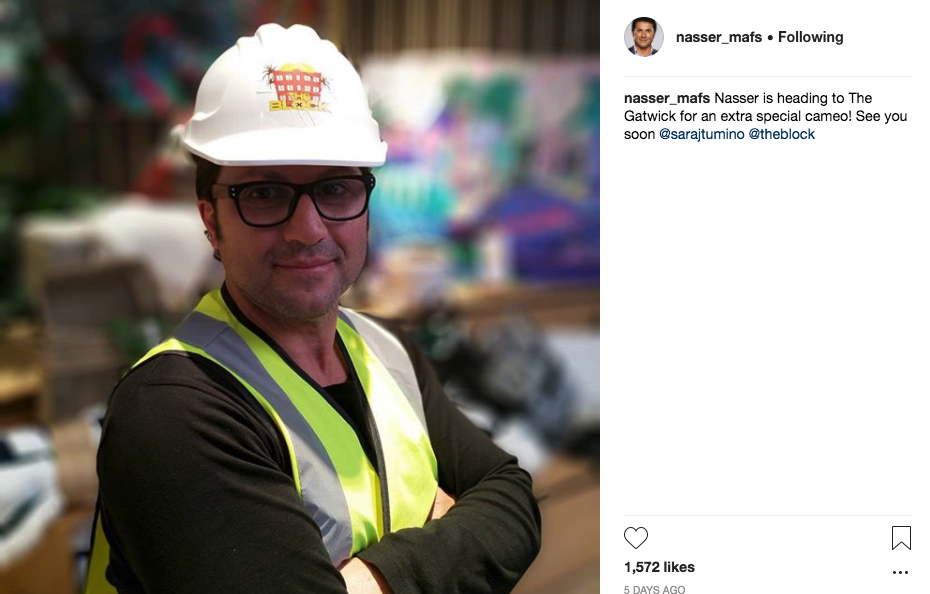 This is when Hayden allegedly revealed the “spoiler”. The couple replied to the post using their official Nine account saying, “You do know the show is over right?”. Hayden then added another comment from his personal account saying, “We already sold our apartment [to] your bestie Kyle what can be better than that?”

Instead of biting back Nasser has since disabled comments on the post but the real question left on everyone’s lips is, has Kyle really purchased himself the apartment?

“Now everyone’s running the story that you bought his apartment,” continued Jackie this morning.

In response Kyle simply laughed before saying, “No I haven’t bought it, why would I buy an apartment in Melbourne?”

Of course most Block-heads would know that the auctions are done live and with the show not rapping up until October it’s not really possible for one of them to have already sold.

But if you’re wondering if Kyle will actually consider snapping up the lux apartment at the historic Gatwick Hotel when the time comes, you’re deeply mistaken.

“In the junkie capitol of Melbourne…No thanks!,” said Kyle referring to the location of the apartments. “An apartment? No….It’s Melbourne, it’s not as good as here.

So sorry to the current couples on the Block, looks like you definitely haven’t secured a buyer in Kyle Sandilands. Maybe if you do the next one in Sydney you might have a bit more!

Keira Maguire Reveals Jarrod Broke Up With Her Over Text

Keira Maguire Opens Up About Those Bachelorette Rumours

The Savage Side Of Marcia Hines We DIDN'T See On TV!