Abbie Chatfield went on a little rant on Tuesday on her Instagram live after being asked her opinion on ‘bill splitting’ and she does.not.like.it.

“I would rather die. I would rather DIE than split a bill, I don’t know why but it makes me feel SO SICK”, she said on her Insta story according go The Daily Mail.

Which sounds EXTREMELY old school and a little uncool BUT what she goes on to say actually clarifies it!

“My rule is whoever initiated the asking should pay! So whoever invited the other first”, she clears up.

This is apparently something her mother taught her “Never make someone pay for something you’ve invited them to”, which is honestly a policy I also live by. 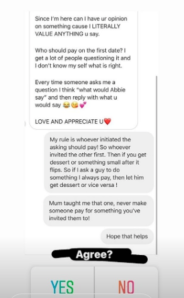 There is ONE exception though.

If it’s an awful date, you’re allowed to split the bill.

“I’ve never had a bad date but I feel like this is the only circumstance I would split”, she concedes.

There you have it! Dem the rules!