What do you think of when you see this photo? 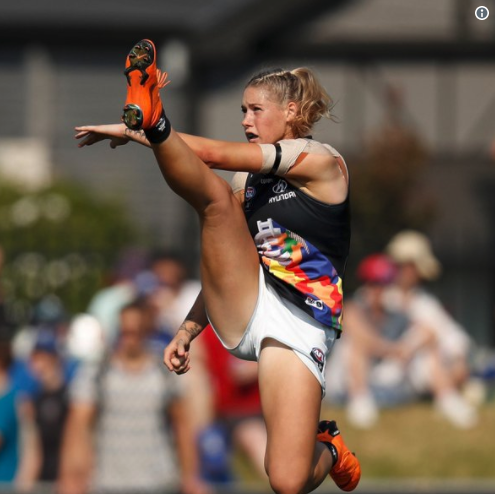 We think of the incredible athleticism displayed by AFLW player Tayla Harris – as well as DAMN, we wish we had that skill!

But sadly, not everyone has this same opinion. And as a result, this photo which should do no more than demonstrate the skill of a player, has drawn hateful and sexist comments.

Channel 7 has come under fire from fans and stars across the world after it removed a picture from its AFL Twitter account after being inundated with comments from trolls.

A picture of AFLW star Tayla Harris kicking during her sides match against Western Bulldogs attracted “inappropriate and offensive” comments.

The Blues star is seen in full flight in her follow-through of the kick.

The 7AFL account removed the photo, replacing it with a message.

Many of the comments made on the post were reprehensible & we’ll work harder to ban trolls from our pages.

“Recently we published an image of AFLW player Tayla Harris. The original purpose in publishing the image was to celebrate the power, athleticism and skills on show in Carlton’s thrilling win over the Western Bulldogs,” the message read.

“The image attracted a number of comments, some of which were inappropriate and offensive. As a consequence, we have removed the image and the comments.”

THE PROBLEM WAS NOT THE PHOTO https://t.co/a48ueZgPcM

The account then reinstated the picture at 11:22 PM, saying “We’re sorry. Removing the photo sent the wrong message.

“Many of the comments made on the post were reprehensible & we’ll work harder to ban trolls from our pages.

Here’s a pic of me at work… think about this before your derogatory comments, animals. pic.twitter.com/68aBVVbTTj

The initial removal of the photo caught the eyes of many sportspeople, with Matilda’s star Sam Kerr saying “the problem was not the photo”.

While Harris didn’t target the removal of the picture, she labelled the Twitter trolls as “animals”.