Overnight an article appeared in the Daily Mail that claimed to unveil the salaries of each participant on the current season of Dancing With The Stars.

While the article claimed that Olivia Newton John’s daughter Chloe Lattanzi was the show’s top earner on $45,000, closely followed by Celia Pacquola and former Bachelorette Angie Kent who are both reportedly on $40,000.

The article then claimed that all other competitors, like Christian Wilkins, Dami Im and Dean Wells only got $15,000, but that wasn’t the lowest reported amount.

They claimed that our very own Beau Ryan didn’t earn a single cent from the show!

This time tomorrow @dancingon10 gets real. It’s legit. People keep saying break a leg but I honestly have a feeling my leg could come off my body. If it does, I told @meganwragg to do a handstand on it then throw it into the crowd. I think she can tell I’m starting to shit myself. Other than that, we’re ready🕺🏼💃🏼

Instead they said that he was signed onto DWTS as part of his current Channel 10 contract.

And so of course Kyle and Jackie O decided to get Beau up on the phone to chat about whether there was any truth to these rumoured salaries.

“They’re saying Beau got nothing! So let’s talk to Beau,” Jackie said during her O News segment this morning.

“You’re so desperate you did a show for nothing they say. What a lie. Is it a lie?” Kyle asked.

Having admitted that he did get paid for his stint on Dancing With The Stars, Beau was much less willing to reveal the actual amount that he received. But he was open about the other cast members.

While the article made out that the rumoured salaries were the amount that each celeb was paid in full, Beau said that there’s no way this was the true figures and that it’s more likely they were paid this amount per episode.

“So it is per episode? But they’re not writing it like that,” Jackie said.

“I think so,” Beau replied.

Our outfits are getting worse but it doesn’t matter because our dancing is getting better…. @meganwragg

While Beau didn’t want to give too much away about his own pay, he did claim he was paid more than Angie Kent, who was tied for second highest on the list.

“I know I was last to go on and they obviously begged me, and I think Angie signed on before me,” Beau explained. “I think she got the most and than I got more than her when I signed on last.”

As for how Beau knows so much about everyone else salaries, he told us that the DWTS contestants actually spoke about their pay openly backstage.

“Do you guys talk about this amongst yourselves in the green room, who gets what?” Kyle asked.

“Yeah of course,” Beau said. “Of course, you walk in you say how much you get. When Chloe said she gets forty grand I just assumed it was per episode.

“Yeah I think that sounds more accurate that it’s per episode,” Jackie added.

Now like we said, Beau still wouldn’t tell us that much about his own pay situation, much to Kyle’s dismay, but he sort of stuffed up a little when he told us that he reckons Angie Kent got paid about $200-$250 grand all up.

This is a day late. Yesterday was an Angie mental/ physical/ spiritual health day. One that was way overdue. My @dancingon10 experience was short and sweet. Just like myself 💁🏼‍♀️BUT I faced my fear of performing as a character in front of an audience every week and pushed through some real personal struggles during this time. This last performance was more than that. I wasn’t dancing for the scores of the judges or opinions of others, this dance was a tribute to my Nanny Fae. To continue to keep her spirit alive. And for that I could not be happier. The dance was elegant and full of love, just like her. A huge thank you to my dance partner and little mate @julian_caillon keep shining and smashing those dad jokes. I may even miss them. You were incredible. To the rest of my dance fam, go get them! You’re all stars to me. For those of you watching, the people on this show are are magical and this experience is hardcore. The effort everyone puts in is out of this world. We are not dancers but we’re putting our all into this experience for ourselves and for you to enjoy. So remember that when you feel the need to maybe be a bit full throttle with your comments. Thank you for the love and support. Everything happens at the right time, and it’s time for this ol gal to put her dancing shoes up and listen to my Nans message. She’s saying you rest now Angie. Rest, recharge, regroup for the next adventure. Bambi on ice- OUT! 💫💕🙏🏽

And if you look back, Beau had just finished telling us that he got paid MORE than Angie Kent. So you would assume that this means Beau got paid upwards of $250 grand… But we seem to think that this pay came as part of his Channel 10 contract as a whole.

“So you’re saying you got paid more than $250 grand to do Dancing With The Stars?” Jackie asked.

“So you could say you did it for nothing really,” Brooklyn chimed in on the discussion.

“How much is your Channel 10 contract worth exactly?” Kyle poked.

“No I’m not allowed to say,” Beau replied.

We didn’t really get much info from here because Kyle was so annoyed with Beau’s tight lips that he basically started a full blown argument with him.

Yeah, this whole conversation was a little confusing really if you ask us… We’ll just blame this one on the full moon though!

Below is a full table of the rumoured salaries that the Daily Mail claims each DWTS contestant got: 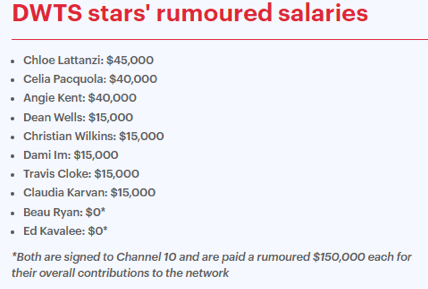 You can hear more from our chat with Beau Ryan in the podcast below!