And it was accidental! He’s not about to change his career to porn….yet.

He’s a 45 year old man, these mistakes happen to the best of us!

He was doing his usual action-man stunting and probably wanted a cool video of himself in the lake, but he started recording early and we got bonus footage of him completely naked as he dived in head first. 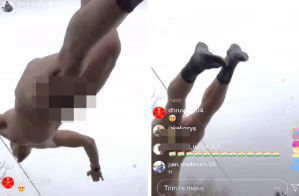 The video has been deleted since.

The man is famously known for loving being nude and good for him! ‘Love the skin you’re in’ and ‘it’s all natural’ and all that jazz.

I dunno if 3m of his followers needed to see that slong though.