The ex-wife of former National Party leader Barnaby Joyce has made her bodybuilding debut after months of training.

Complete with a green bikini with diamanté encrusted straps and clear heels, the 49-year-old shed 15kgs ahead of the competition, walking away with a fourth place medal in both the First Timers and Miss Fitness Model Momma categories.

The mother-of-four took to Instagram to thank her coach, Kylie Steel for helping her on this “amazing journey”.

“You are one awesome person and will be in my heart forever,” she wrote.

“There were doubters, but you never did. You believed in me, encouraged me and a gentle, strong guiding hand. Thank you for being part of my amazing journey and to my friends who believed I could. Love for ever.” 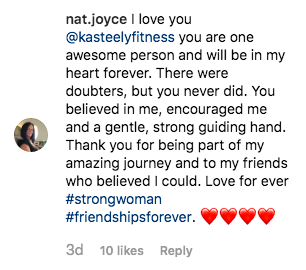 Speaking to Women’s Day last month, Natalie said her four daughters – aged between 16 and 22 – weren’t too happy at the idea of their mother flaunting her toned figure on stage.

She said the idea of their mother “strutting around wearing nothing more than a skimpy bikini, flexing my muscles for all to see” was not appealing.

However, it was seeing her husband of 25 years leave her for a younger staffer in 2017 that inspired her to transform her body.

“I had two choices: either unravel, or shake myself off and aim to get the best out of myself,” she said in an interview.

“In June last year I looked in the mirror and thought ‘I’m not going to let someone else’s appalling behaviour derail me’. So I joined the local gym, and I’ve never looked back. And I’ve always wanted to compete in a bodybuilding comp.”

While the former Deputy Prime Minister is expecting his second child with Vikki Campion, Natalie is jumping strength to strength with her fitness.

It has not been addressed whether she plans to compete in future bodybuilding competitions off the back of her successful first performance.