Animal rights activists have held an extreme protest in the middle of Sydney to campaign against the production of wool due to the alleged disgraceful treatment of sheep.

Activists took to Sydney’s Pitt Street Mall on Wednesday afternoon with a rather disturbing demonstration. 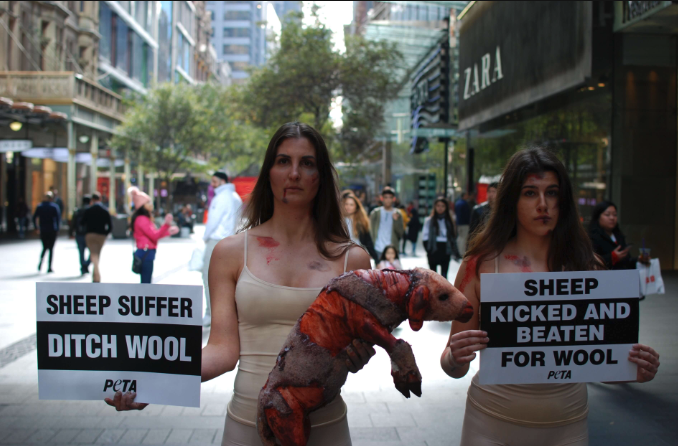 This protest came after animal rights group PETA (People for the Ethical Treatment of Animals) released several videos about the horrific way sheep are allegedly treated in the wool industry.

The footage showed sheep shearers allegedly punching the animals in the face, beating them with electric clippers and stamping and standing on their heads and necks.

PETA also claimed that lambs were being deliberately mutilated and left with open wounds on their behinds.

“Their ears are hole-punched their tails are chopped off, and males are castrated – all without any pain relief,” the group said.

“They endure vicious beating and sustain bloody wounds and broken limbs when they’re used for wool.”

PETA also claimed that sheep should only be producing enough wool to keep themselves warm in winter but after thousands of years of genetic manipulations, sheep are now producing unnatural amounts of wool.

“It’s arrogant to think that the animals whose bodies we have altered in order to make money wouldn’t be scared when we pin them down to rob them of their coats.”

The protest was designed as a way to warn consumers not to purchase wool products in order to stop these horrific conditions.

“The best thing you can do for sheep is refuse to buy wool. It’s easy to check the label before you but clothing and other items.

“If it says ‘wool’, leave the item on the shelf and look for an animal-free alternative”.

This comes following another disturbing protest organised by PETA in January which saw them barbecue fake dog meat.