If a bride really cares about what people will be wearing at her wedding, she’ll be sure to include a note about the dress code.

Well one bride did just that, noting how her nuptials were black tie optional, but when a veteran who she invited showed up wearing his Marine Corps Blue Dress uniform, she got so angry that she kicked him out.

Writing on Reddit’s Am I The A**hole forum, the bride explained the situation saying:

“The son of one of my husband’s family friends showed up to my wedding in his Marines formal wear, complete with all his medals. Now, I have nothing against anyone in the military but this was a black tie optional wedding and frankly it felt very out of place and it seemed like he was just trying to show off. My wedding had over 300 guests and nobody else felt the need to wear something to make them stand out.”

She added that up until the point she asked him to leave, “he of course was acting very well mannered and like a complete gentleman, as one might expect from a member of the armed forces, and there were even a few excited teenage girls at my wedding who wanted to take a picture with him, to which he graciously agreed.”

Her issue, as she explained it, was:

“Many people were thanking him for his service, and frankly it just felt like the only reason he wore that was to be in the spotlight and make it about him, which I don’t think you are supposed to do at someone else’s wedding. If he wants to wear that to his own wedding then fine, but the whole point of having a dress code at a wedding is so that no one guest will stand out too much. I felt that he should have known this, since the whole point of uniforms in the military is so that you don’t stand out from everyone else!”

The bride then admitted to feeling bad about kicking him out and asked the forum if she was a jerk for doing so.

The response was pretty split, but the most interesting comments came from members of the armed services. 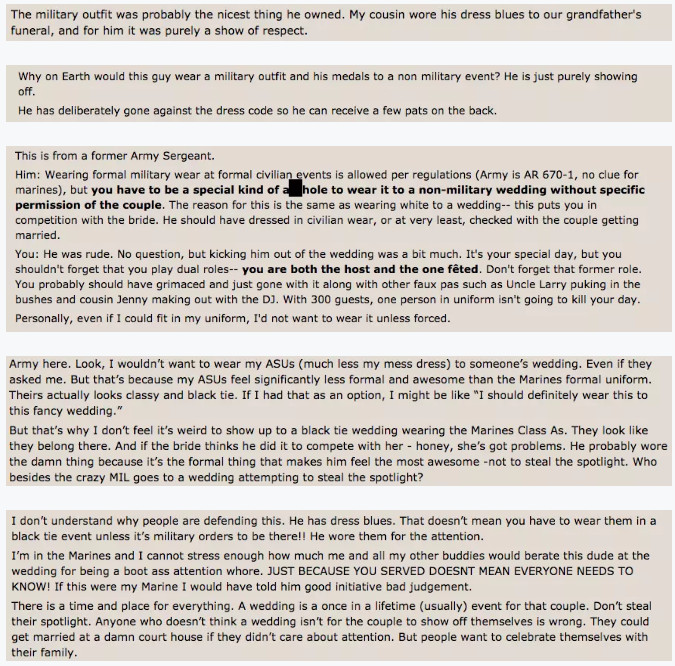