A senior engineering student at Eastern Washington University in the US, Jared Mauldin, wrote an honest letter to his campus newspaper about how women in his classes aren’t his equals.

It made the point that women who choose to pursue STEM (Science, Tech, Engineering and Maths) fields are unequal to men, but nor for the reasons you’d assume.

Jared wrote that women aren’t less apt than men, but they aren’t given the same privileges and opportunities that their male counterparts are. 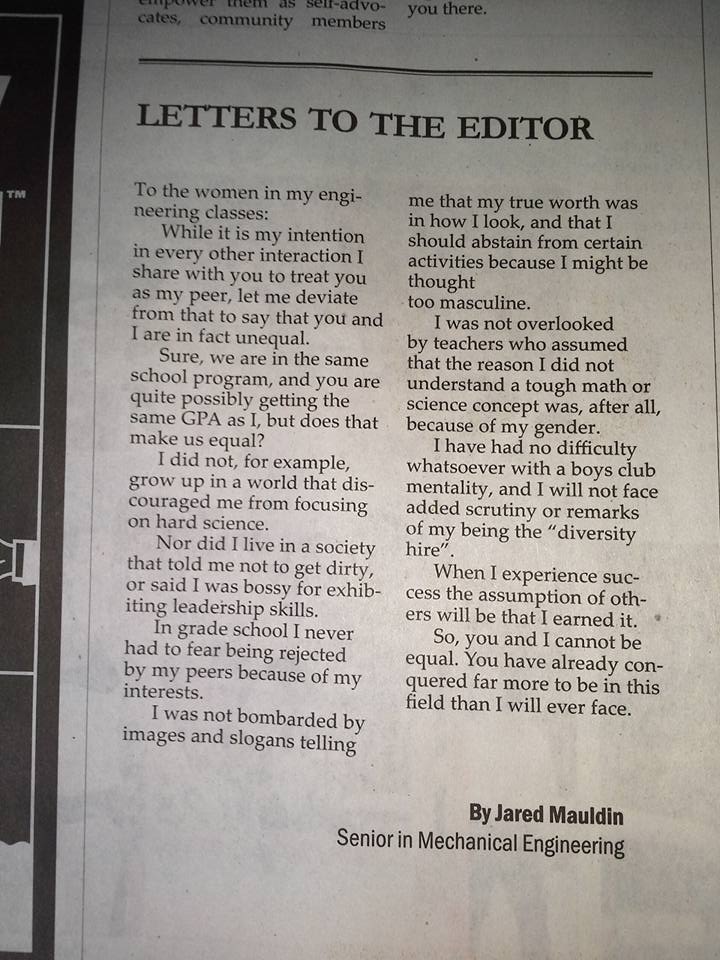 “I did not, for example, grow up in the world that discouraged me from focusing on hard science,” Mauldin wrote.

“Nor did I live in a society that told me not to get dirty, or said I was bossy for exhibiting leadership skills.”

He commends his female peers for persisting through hardships they’ve endured in a male-dominated field.

He posted on his Facebook page about the inspiration for the letter:

“The particular story that really had an impact had to do with Holly Jeanneret.

“When Holly and I started Calculus 1, I quickly realised (sic) that while I was good at math, she was better; a lot better.

“Holly consistently outscored me on exams and homework assignments; she understood the concepts on a level I couldn’t match.

“However, I often saw other men walk right past her and wander around the class looking for another partner.

“If Holly disagreed on an answer, instead of looking at both answers to find out who had done something wrong, as was common when I worked with other men, I saw them jump to the conclusion that she must be wrong.

“It wasn’t just Holly either. Since then I have seen the same behavior from men in nearly every class.”

“We can’t know what it feels like to grow up in a society where these subtle slights are the norm; a society where women have become so accustomed to them that they can only recall the major ones.

“We cannot empathise (sic), and our experiences are not the same, but we can listen and try to understand. From there, we can act.”